History of a National Museum

Birth of a Museum 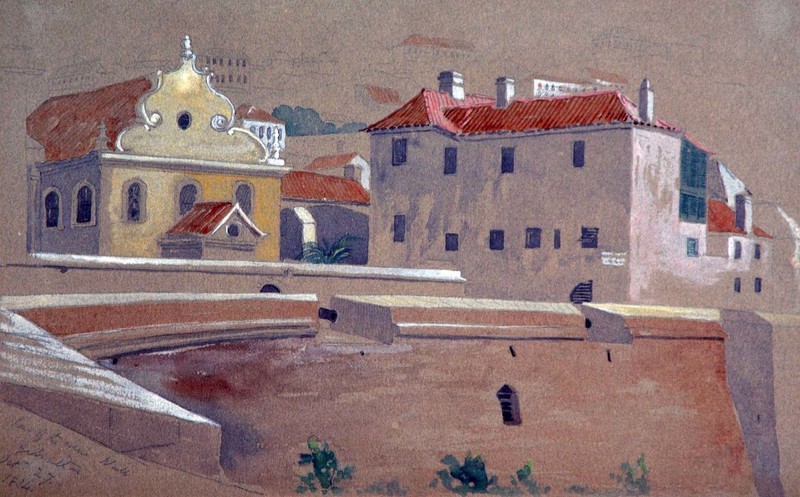 The first known recording of the proposal for opening a museum was made in 1835 when the issue was raised in a meeting of the Gibraltar Scientific Society- a group of British Army Officers who met at the Garrison Library. However, it has been noted that in 1830, the hospital included a “room for specimens of natural history and morbid anatomy”.

Because of Gibraltar’s turbulent military history, it can be assumed that there had been no time previous to 1830 that the concept of setting up a museum would have even been entertained.

However, a Reverend John White, Chaplain at Gibraltar in the 1770s, collected many zoological specimens and kept detailed records, corresponding with famous zoologists of the time. White wrote Fauna Calpensis the first detailed zoological account of Gibraltar. However it was never published and is now considered lost.

By the end of the 18th Century the Gibraltar Scientific Society had initiated its own museum, which became so central to the Society’s activities that in 1842, it changed its name to the Museum Society. A Mr. Frembly was elected as curator on the 19th November 1836. The precise location of the museum is uncertain, but it is known that the museum was housed in rented accommodation and had a large collection of varied specimens beginning to accumulate.

The society owed a lot of its success to individuals with energy and commitment and there are a number of references to notable individuals in the Minutes. An example of this is the Minute of 3rd October 1849 where it is “resolved that a letter of thanks be addressed to Capt. Flint [Secretary] for his valuable support and services; especially in the pains he has taken in the removal and arrangement of the museum”.

By 1850, the meetings became infrequent and proposals were put forward to unite the society’s museum with the Garrison Library, which had been in existence and functioning independently since 1793. The proposal was not taken forward and the collections were transferred to the Soldier’s Home where they suffered mixed fortunes. Gibraltar had lost its first museum.

In the ensuing years, correspondence was passed between Governors and various military personalities on the topic of Gibraltar needing a museum. However nothing concrete was ever done and Gibraltar was without a museum for the next 35 years.

The building in which the museum is situated is unique. It has the longest known historical sequence of any building in Gibraltar and is the only building that has every period of our urban history represented. 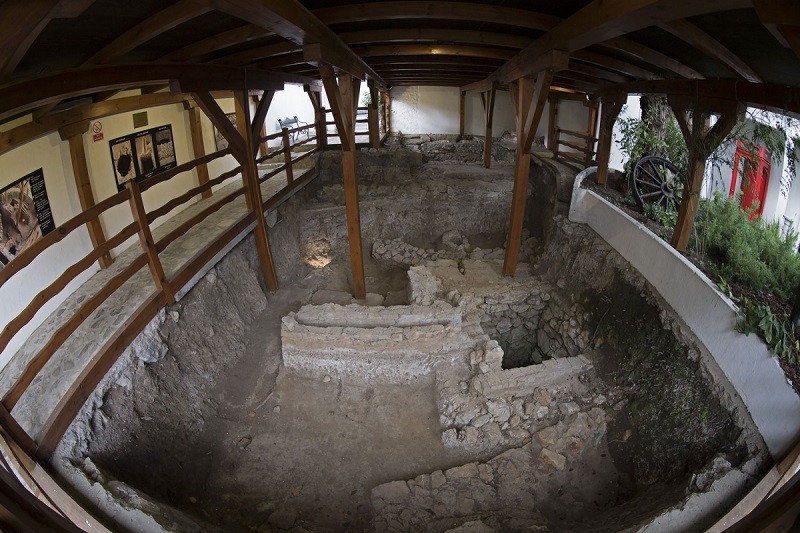 Archaeological excavations in the museum garden

Evidence Dating Back
to the 13th Century

In 1996, when restoration works at the Museum uncovered a double arch way, it was decided to excavate at the base of the arch to reveal the possible structures related to it. We got far more than we expected. It turned out that the upper archway had been built to support the wall whilst the lower and load bearing archway was being constructed. The floor itself was excavated right down to the natural gravels (where no further human activity is detected). The lowest habitation revealed a house occupied by the Almohads in the early part of the Islamic occupation of the Rock. These are the only existing remains of an Almohad construction in Gibraltar. The Almohads were a North African Dynasty who resided in Gibraltar from 1160 to 1309 when the Rock was captured by the Spanish.

Above this were successive habitation levels from the Islamic period and from the Spanish period. The most fascinating, was a layer of thick ash and soot found to extend across the entire floor area. This meant that it was caused by a large fire in the building since it was not restricted to a hearth area. The archaeological remains associated with this dated the level very accurately to the second half of the 18th century. There are vivid accounts in Drinkwater's Diary of the Great Siege, of the bombardment of the area around Bomb House (the early name for the building which is now the museum), and how the house was hit by cannon shot. A group of officers dining in the house at the time were injured - one of them fatally, and part of the house burnt down! The excavation had revealed this event precisely.

When the Governor suggested that the Gibraltar Museum should be founded in 1930, the choice of building to be used to house the museum was obvious. Close to the Main Street of Gibraltar in the town centre was a house known as Bomb House, in which cellar was the most extraordinary structure. An almost intact Islamic Bath, that dates to the 14th century North African Merinid Dynasty which ruled in Gibraltar. In fact, the baths were in such an amazing state of preservation, that they were held to be the best in existence in Europe at the time.

Yellow sandstone from the original 14th century construction is still visible in some of the walls of the museum and the remains of a well of the same period can be seen in the museum's garden. 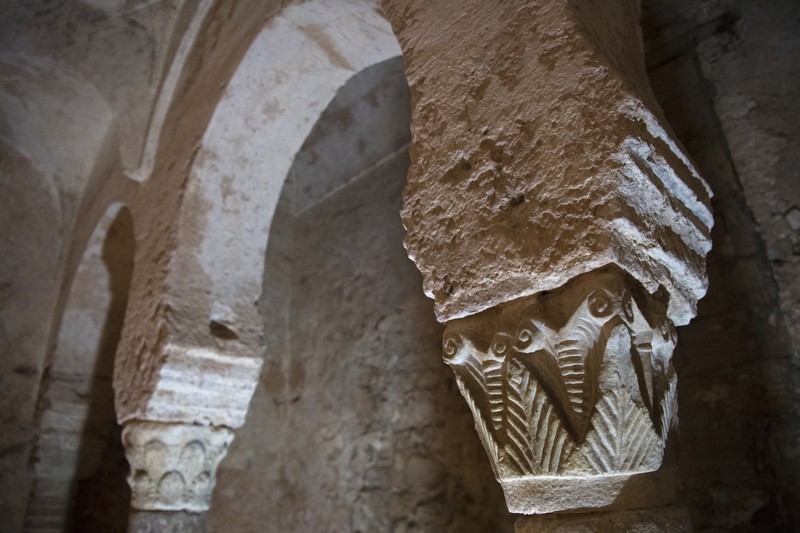 Another part of the excavation, this time in the garden revealed a water conduit, dating to the Spanish period. It was found entering the garden from Line Wall Road (probably from the aqueduct that ran along that road), under the double arches, through the rooms and into a cistern under the interior patio.

The excavation also revealed a water tank and trough where animals would have been brought to drink. Archival records show that a house belonging to a Juan Serrano was located here during this period.

Board of Ordnance emblem on a cast iron fireplace of the Bomb House, official residence for the Principal Ordnance Officer

In the 18th and 19th centuries the British repaired an old aqueduct that ran along Line Wall Road, just west of the museum. The garden excavation revealed water channels lined with slate - a typical construction material used in British times. These channels were probably associated with the aqueduct. In 2016 a further 19th century water channel was discovered in the museum garden.

More visible features of the house are the black and white marble slab floors dating from the British period and a cast iron fireplace complete with the symbol of the Board of Ordnance, probably made specifically for the building which was then known as the Bomb House when it served as the official residence for the Principal Ordnance Officer.

Establishment of a Museum

The Gibraltar Museum was finally founded in 1930 as a result of an initiative taken by the Governor, General Sir Alexander Godley and it was opened on 23rd July 1930. The location of the Gibraltar Museum in what was known as Ordinance House, the residence of the Principal Ordinance Officer, was “closely allied to the Moorish Occupation of Gibraltar, as part of the building contained the famous Moorish Baths which now form part of the Museum”.

The outbreak of the Second World War, the subsequent evacuation of all supplementary persons from the Rock, and the re-intensification of the military role of Gibraltar as a fortress, led to there being a suspension in the activities of the Gibraltar Museum Committee and no meetings between 23rd March 1939 and 3rd February 1947. Throughout this period the museum building was being used to store food supplies. After the war, control of the museum and its activities slowly became more and more dominated by civilians. 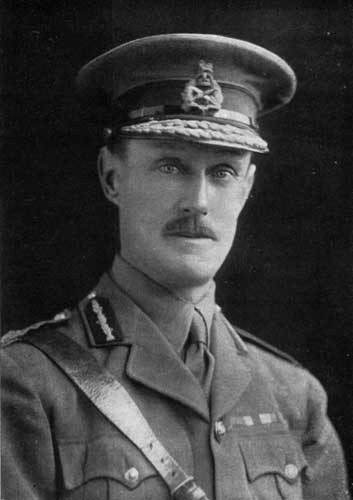 Today the Museum has expanded to occupy the entire building and its staff compliment has grown from a single Curator in the 1970s to a team of professionally qualified individuals. The Museum not only involves itself in the research and display of Gibraltar’s heritage, but its staff also provides support to HM Government of Gibraltar’s Heritage Department and are involved in Gibraltar’s wider heritage management issues.

Since 2018 the Museum was renamed the Gibraltar National Museum as prescribed by the Heritage and Antiquities Act 2018.