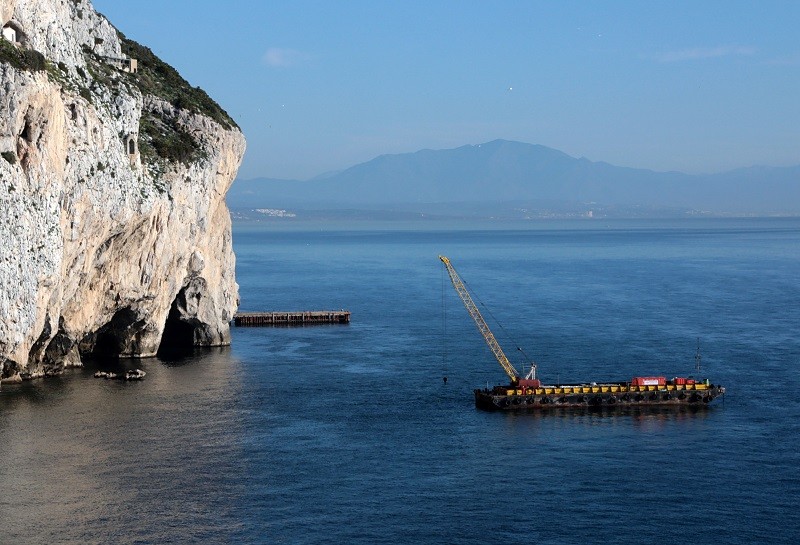 As part of its commitment towards maintaining the important World Heritage Site known as the Gorham’s Cave Complex, Her Majesty’s Government of Gibraltar has commissioned coastal defence infrastructure works. These consist of the placing of gabions on the beach in front of the caves which are aimed at protecting the sensitive archaeological deposits from the action of waves during storms.

Gabions were initially placed at Gorham’s Cave and their effectiveness has been monitored. They have been successful at preventing any marine erosion even during the biggest recent storms. The gabions have additionally served as walkways for visitors, thus further minimising impact. The next stage is to place gabions to protect the deposits at Vanguard Cave. Given their elevation and distance from the beach these deposits are safe at the moment but slight sea level rise and an increasing frequency of bad storms could put the site at risk. Before reaching such a stage, gabions are being placed now.

These works were part of the commitment given by HMGoG to UNESCO in the site’s five year Management Plan. Works commence on Friday 16th February with the deployment of equipment by sea aimed at bringing in quantities of broken limestone rock that will fill the gabions and thus provide an effective sea wall. The design, matching that at Gorham’s Cave, is aimed at additionally minimizing the visual impact on the site. The remoteness of the site and the difficulty of access makes the operation a difficult one which has needed careful planning.

The Minister for Education, Heritage, Environment, Energy and Climate Change, the Hon Prof John Cortes, said: “This is essential work to protect the integrity of our World Heritage Site, and shows the Government’s commitment to this. It is an example of work that we needed to do particularly as the threat of increasing sea levels due to climate change becomes more and more apparent. We are the custodians of this unique site, and will ensure it is well looked after.”